The gold-headed cane is a tradition that dates back to 1835. It marks the arrival of the first ship of the year to the Port of Québec from overseas. The original object coveted by ship’s captains wasn’t a cane at all, but rather a goldplated snuffbox, snuff being very popular in those days.

We owe the tradition to John Munn, a Québec City shipbuilder. In 1833, Munn was the first person to cross the ocean to England on a steamboat built in Québec City. When he arrived, the authorities presented him with a gold snuffbox, which gave him the idea of doing the same thing back home. Eager to see an earlier start to the navigating season, Québec City’s shopkeepers made the tradition their own. In the second half of the 19th century, the Québec Port Authority took over from the shopkeepers to keep the custom alive. Before the advent of a winter sailing season in 1959, the gold-headed cane was awarded only in the spring, once winter conditions had subsided. Now that there’s a winter sailing season, the first ship of the year to dock at the Port of Québec raises anchor in early January.

Today, the Québec Port Authority is proud to carry on one of the finest traditions in the city’s maritime and commercial history. As a coveted prize, the gold-headed cane remains a symbol of cooperation between the Port’s clients and users, administration, and service providers.

Here are the latest recipients of the Gold-Headed Cane: 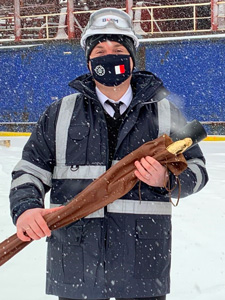 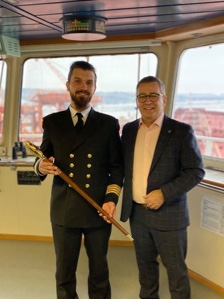