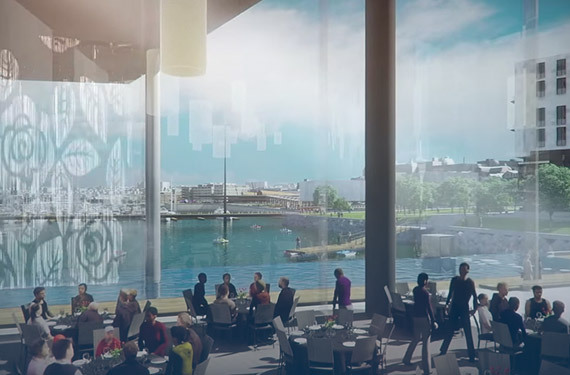 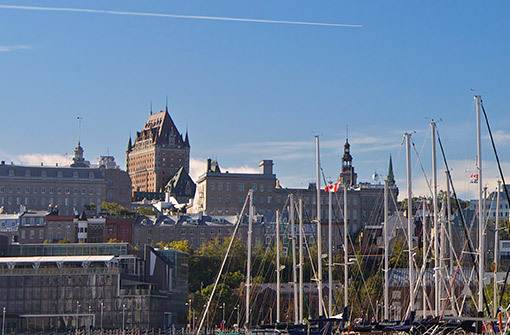 Originally, Louise Basin was the industrial heart of Quebec City's port facilities. Over the years, the area’s daily activities featured the operation of an oil terminal and coal shipping. In the 1970s, those industrial activities gradually disappeared, and the Louise Basin district and the developed surrounding land have existed in their current form since 1983.

This port district includes the Port of Québec Marina, grain transfer activities operated by Bunge of Canada, the head office of Ocean Group, the Marché du Vieux-Port, a bike path, walking paths and parks in addition to some 1,000 open-air parking spaces.

In recent years, the Québec Port Authority (QPA) has been examining the best potential uses for this exceptional area, the only one of its kind in the province of Québec. This reflection is founded on the following principles: ensuring harmonious port-city integration, contributing to citizens’ quality of life, highlighting one of Quebec’s most attractive urban panoramas, creating an international signature and providing a roadmap for the area’s development while allowing full citizen participation.

In short, the Port of Québec’s vision for the future includes the conservation and creation of high-quality public spaces such as an urban beach, wooden courtyards for outdoor activities, a district market to serve local residents, the promotion of public art, the creation of a diverse living environment through the construction of town houses, condominiums and a hotel in addition to commercial and office space. The vision also includes the construction of a children’s museum with educational play spaces to make the district a must-see family destination in Quebec City.

To carry out this project, the Port of Québec entered into an agreement with the Chambre de commerce et d’industrie de Québec so that it can help us identify the profile for an investment group, undertake soliciting to find potential developers and design measures to promote international trade within the commercial component of the project.

Moreover, future developers will need to meet the following five requirements to participate in the project:

As for the next steps, the vision for the future is now under consultation through the Port of Québec’s website, until the end of fall. Then, adjustments will be made to the concept based on the comments received. In parallel, the Chambre de commerce et d’industrie de Québec will carry out its mandate.

In short, this vision for the future being presented to the public proposes diverse and complementary uses for Louise Basin that would benefit Quebec City's residents and visitors. We envision a port district that integrates the key principles of a respectful port-city relationship. It was fundamental for the QPA that, once shown this vision, the community eventually buy into the project.

We invite you to examine our development vision and send us your comments and suggestions at communications@portquebec.ca.