1535 : Jacques Cartier discovers the beauty of Quebec City, then called Stadaconé, and its river.

In Algonquin, “kébec” means “where the river narrows.”

1608 : Samuel de Champlain builds a fortified trading post, which marks the founding of the city.

Beginning in the 17th century, marine pilots need to be trained to navigate the  St. Lawrence in order to protect ships and their cargo. 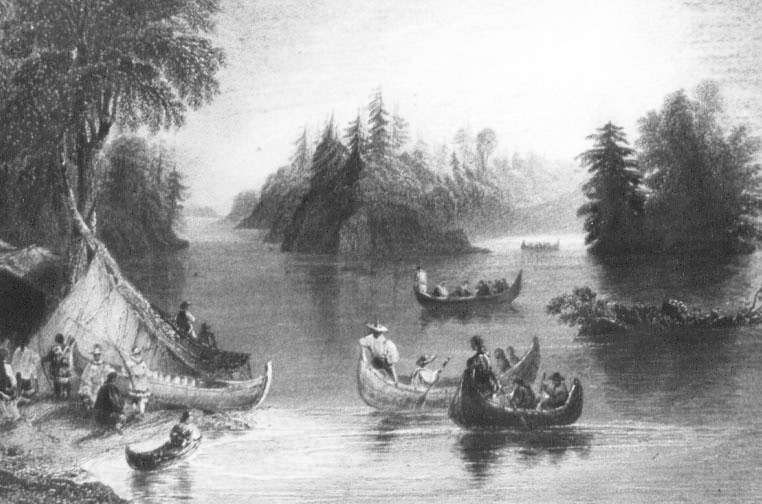 1805 : Marine traffic and port activities are on the rise. The Trinity House of Quebec is founded to regulate the burgeoning port sector and oversee navigation.

1821 : The wood trade takes off and is central to Quebec City’s port activities. Nearly 600 ships leave the Port of Québec each year for Great Britain.

The Port of Québec becomes the economic hub between the Great Lakes and  the Gulf of St. Lawrence. It even grows into the third largest port in the Americas, after  New York and New Orleans.

1800-1850 : About 30,000 British and Irish immigrants pass through the immigration shed at the Louise docks each year.

1875 : The Government dissolves the Trinity House of Quebec, whose property and power are then vested in the QHC.

With preferential tariffs for wood being abolished, markets being moved to Montréal and inadequate infrastructure, the mid-19th century saw a downturn in the Port of Québec’s economic activities.

1850-1900 : The Pointe-à-Carcy wharf is built, and the Louise Basin opens. Louise, the daughter of Queen Victoria, inaugurates the sector by laying down the cornerstone to the docks that now bear her name.

1879 : The train reaches the North Shore, allowing for more efficient transportation of transferred goods. The Port of Québec successfully begins to export mine, grain and forest products. 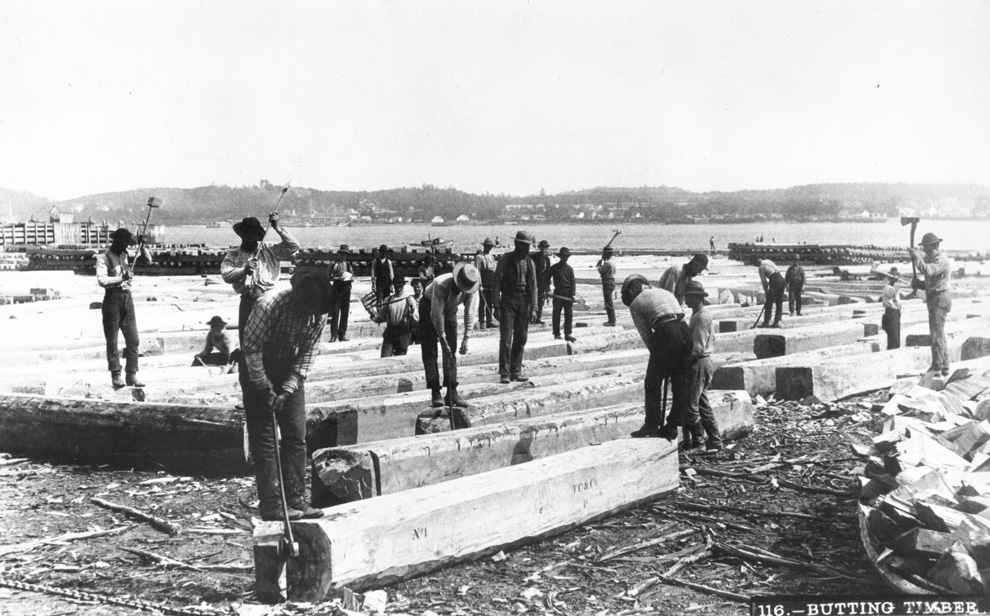 1909 : A major fire razes a grain shed in the Pointe-à-Carcy sector. The QHC will later construct its new offices at this location.

1914 : During the First World War, the Port of Québec serves as an embarkation point for soldiers and food supplies being sent to troops. 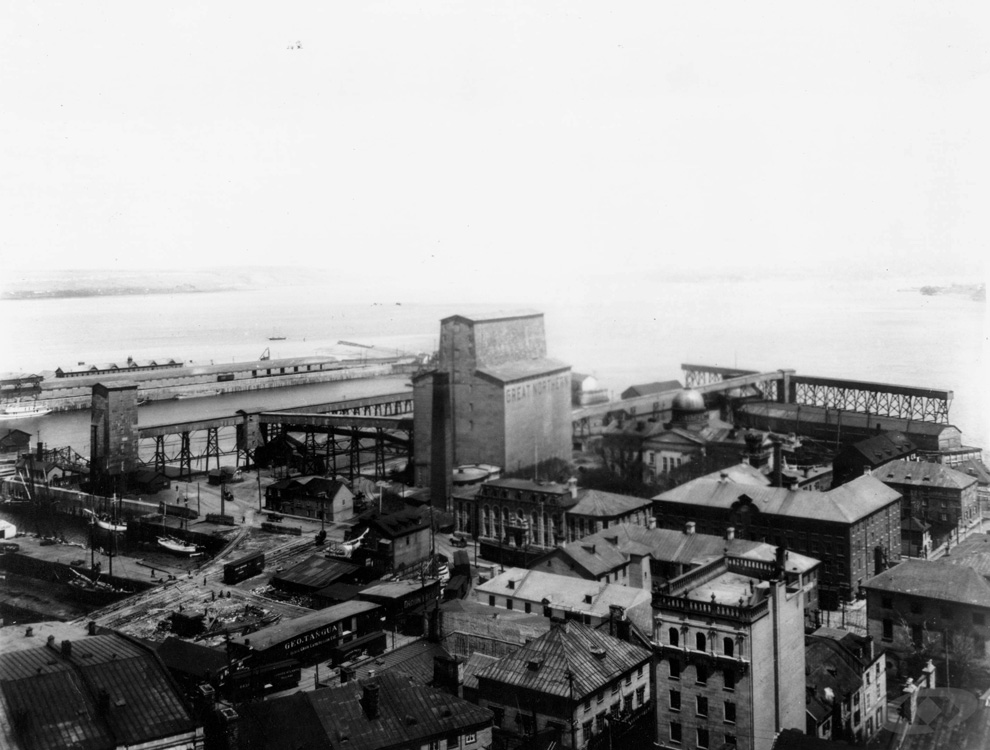 1927 : New deep-water docks are built at Anse au Foulon. These docks can receive even the largest transatlantic ships, which have been unable to berth at the Louise Basin.

1930 : RMS Empress of Britain, the new passenger ship, berths at the Port of Québec—a memorable moment in the city’s port history. 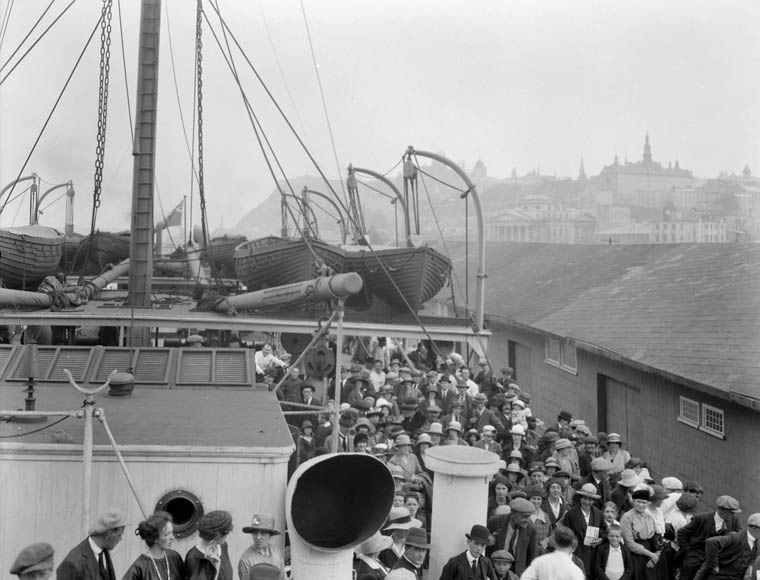 1929-1933 : The world economic crisis of the Great Depression puts the Port of Québec in financial distress.

1936 : Following the recommendations of the Gibb report, in which the Port of Québec’s financial deficit is addressed, the Government of Canada dissolves the QHC and creates the National Harbours Board.

The term “Québec Harbour” was replaced with “Port of Québec,” a term that refers to the port’s geographic sector and not its administration.

1953 : Following the creation of the National Harbours Board, changes are made to port infrastructure, and terminals are added. These enable the Port of Québec to diversify its revenue and correct some of the deficiencies identified in the 1930s Gibb report.

1960 : Bolstered by considerable growth from the introduction of winter navigation, and in the spirit of the major port projects around the world, the Port of Québec begins construction on five deep-water docks (15 metres) on the Beauport Flats. 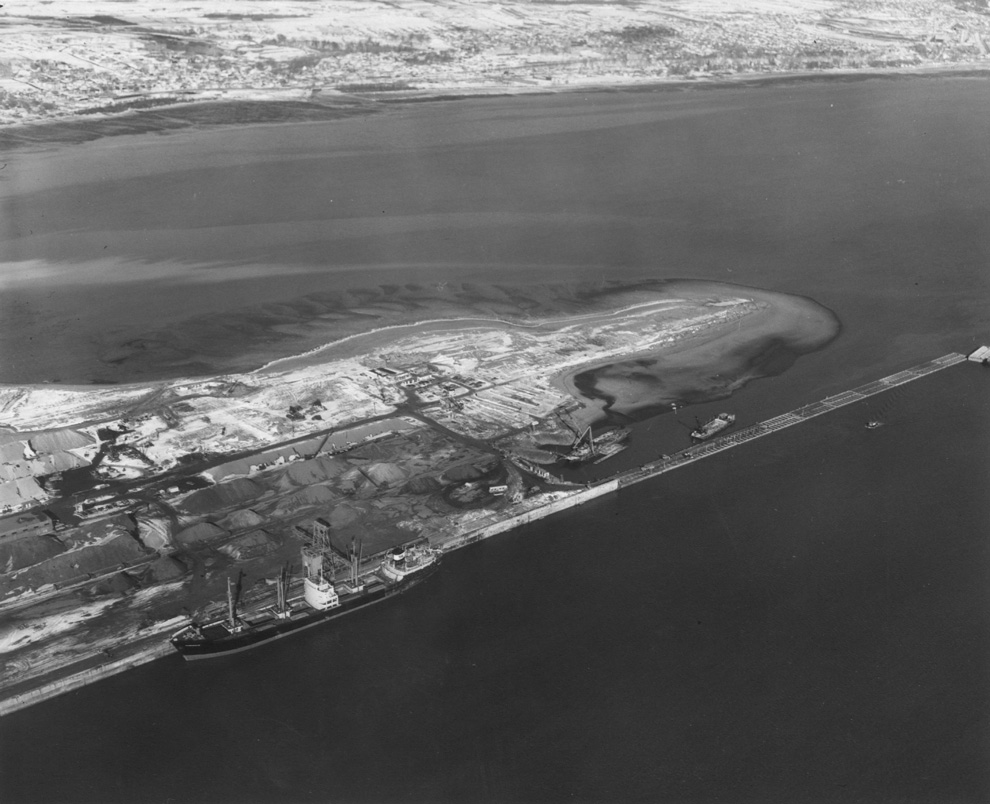 1967 : Expo 67 is held in Montréal. Ship traffic increases, with visits by the renowned SS France and SS Michelangelo. This doubles the number of passengers landing in Quebec City.

1972 : The Port of Québec sets a new tonnage record, with traffic up 41% from the previous year.

1980 : The Port of Québec’s commercial activities are hurt by decreased grain production across Canada, higher grain prices and the increased use of western Canadian ports.

1983 : The Government of Canada replaces the National Harbours Board with the Canada Ports Corporation (Ports Canada). With the administrative change, the Port of Québec becomes the Québec Port Corporation.

Now more independent in its decision-making, the Port of Québec  begins a new phase of development by modernizing its infrastructure  and diversifying its commercial activities.

1984 : This year marks the 450th anniversary of Jacques Cartier’s arrival. Celebrations include the inauguration of the largest transatlantic sailing race, which runs between Quebec City and Saint-Malo, France, Cartier’s hometown.

1985 : The historic district of Quebec City, including its port, is named a UNESCO World Heritage Site.

1986 : The Port expands its commercial ventures to diversity its markets and position itself as the port of entry into the Great Lakes market.

1989 : The Port of Québec Marina facilities are improved, leading to a 34% jump in tourism.

1990 : Ships are rerouted to the Port of Québec because of the conflict in the Persian Gulf. The Port receives 51,000 passengers arriving in such great ships as the SS Rotterdam, MS Sea Princess and MS Crystal Harmony.

1991 : Québec officially launches its cruise industry, which will see significant growth in the next years.

In response to the decline in grain products, there is heavy diversification in traffic, terminals and revenue in the 1990s.

2000 : The QPA adopts a new corporate vision and invests even more into Quebec City’s cruise industry. The Port of Québec is able to attract the biggest cruise lines, such as Holland America Line, Princess Cruises and Royal Caribbean International.

2001 : To develop Quebec City’s cruise industry potential, the QPA takes control of all Pointe-à-Carcy properties, which had previously been administered by Public Works Canada. Over $32 million is invested in the construction of wharves and a cruise terminal.

2002 : The Ross Gaudreault Cruise Terminal is unveiled, along with Espaces Dalhousie, a dedicated events venue. The SS Rotterdam is the first ship to berth at the Pointe-à-Carcy terminal.

2004 : The Port of Québec receives a special new visitor, the impressive Queen Mary 2. Nearly 3,000 cruise ship passengers step out into the capital city.

2008 : The Government of Canada marks Quebec City’s 400th anniversary by funding the redevelopment of three riverside sites, the Brown Basin, Pointe-à-Carcy and Beauport Bay—an important legacy that gives everyone direct access to the St. Lawrence. With that legacy, the Port of Québec now dedicates 20% of its territory to recreational tourism. The year 2008 also marks the 150th anniversary of the Québec Port Authority’s incorporation.

2014 : The first Quebec City Forum on International Cruises is held. Bringing together all the players in the cruise industry, the event makes it possible to agree on an action plan adapted to the significant growth of this industry in Quebec City.

2015 : Following the unveiling of its first sustainable development action plan in 2014, the Port of Québec launches its Environmental Citizen Participation Process, allowing citizens to comment on projects carried out on the port territory.

2017: Rendez-vous 2017! On the occasion of Canada's 150th anniversary, tens of thousands of visitors flocked to the wharves of the Port of Québec and its Basin Louise to take part in the Rendez-vous Naval and admire some 40 sailboats.

First visit by a cruise ship to Quai Paquet, Lévis with the docking of the Sagga Saphire. The 2017 cruise season passes the historic milestone of 200,000 visitors. 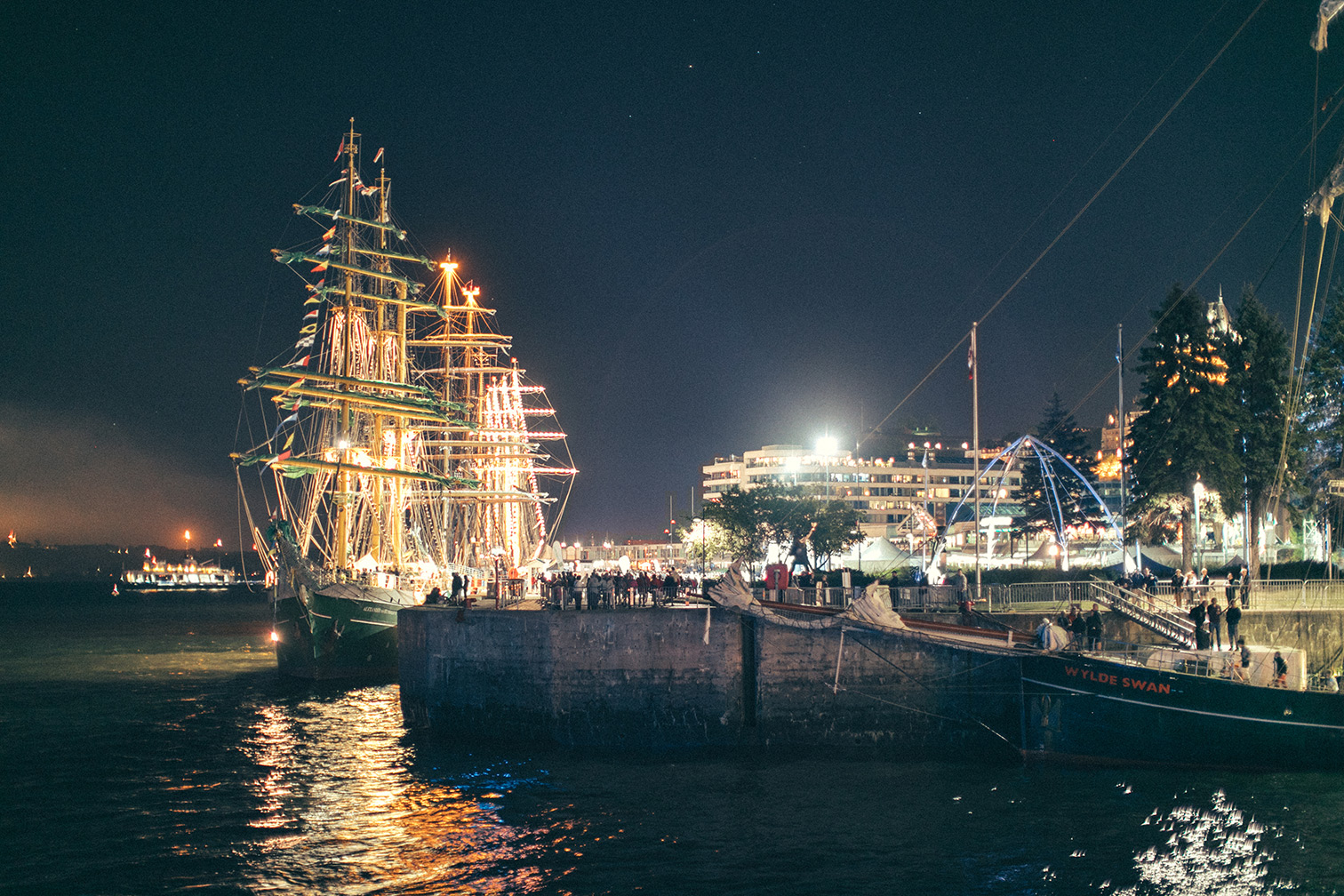 2018 : Agreement of $15.5 million in financial support from the Government of Canada for the restoration of strategic infrastructure at the Port of Québec through the National Trade Corridor Fund (NTCF). In addition to the investments made by the Port and its operators, work worth $169 million will begin the following year.

2019 : Signing of a historic commercial agreement with Hutchison Ports and Canadian National (CN) to build and operate the new container terminal in the Beauport sector as part of the Laurentia project, which aims to become one of the most modern and innovative intermodal container terminals in North America.

The Port of Québec shows incredible development potential. The Port Authority’s entrepreneurship, its esteemed partners and its strategic vision for sustainable development mean the best is yet to come!