Québec City, September 21, 2020 – The Québec Port Authority (QPA) is proudly committed to Défi Saint Laurent (the St. Lawrence Challenge), and joined last Saturday’s International Coastal Cleanup Day for a plastic-free St. Lawrence. The Port also used the opportunity to launch its new Seabin as part of the Seabin Project, an initiative to remove plastic waste in bodies of water around the world and help make our oceans plastic free.

Committed to the St. Lawrence Challenge

Last Saturday the Port of Québec’s recreational establishments—the Port of Québec Marina, Baie de Beauport, and the cruise terminal—received the Mobilizer level of Défi Saint-Laurent certification. Thus, in addition to actions already taken to reduce waste and maximize reuse and recycling, the three establishments are committed to going even further in 2020 and 2021 to reduce the use of plastic and protect the biodiversity of the St. Lawrence River, which suffers from the presence of microplastics. These commitments include using reusable glass, banning or seeking alternatives to single-use plastic water bottles, and testing a Seabin waste collector at the Port of Québec marina.

On the occasion of World Cleanup Day on September 19, the port welcomed some fifteen freedivers from the Québec City Sports Apnea Club – CASQ and the Montreal ApneaCity freediving school for an underwater cleanup of Louise Basin.

This second Great Canadian Cleanup was an initiative of G3E (Groupe d’éducation et d’écosurveillance de l’eau de Québec) and the Collective for a Plastic-free St. Lawrence (Défi Saint-Laurent, Mission 100 Tons, The Great Canadian Shoreline Cleanup, and The Blue Organization). It aims to raise awareness of plastic pollution in the province, but most of all to get all spheres of society involved in cleaning up our shores. Four cleanup activities were held simultaneously in Québec City to clean the shores of the St. Lawrence, including one at the Port of Québec Marina.

In three hours, participants hauled out nearly 1 ton (700 kg) of garbage from the basin, including 5 bicycles, an airport caddy, several tires, hundreds of cans and glass bottles, plastic, Styrofoam, and masks!

The Port of Québec wishes to thank all the volunteers and organizers who helped improve the St. Lawrence’s health and its unique riverscape. 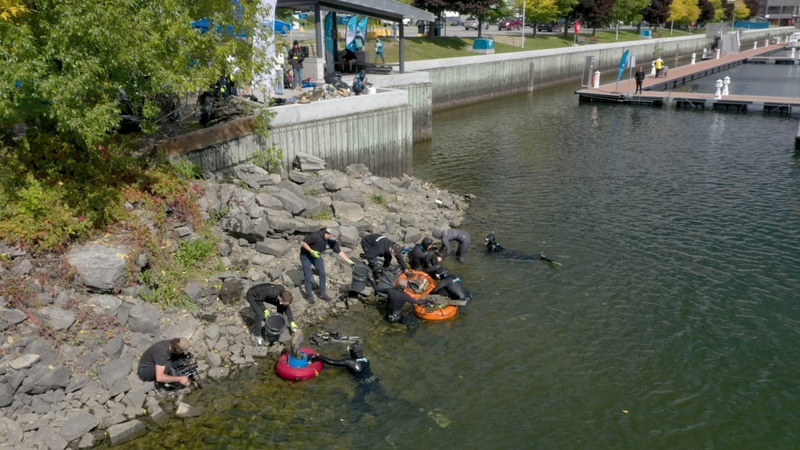 Innovating with the Seabin collector

The Port of Québec is participating in the Seabin Project, a global research, technology, and education initiative dedicated to reducing the amount of plastic that reaches our oceans. Last month the Port installed a Seabin at the marina, the first of its kind in Québec.

The Seabin is like a marine garbage can and is made of 100% recycled plastic. It’s installed in marinas where waste pushed by winds and currents can naturally accumulate, recovering pollutants such as garbage, pieces of plastic as small as 2 mm, and hydrocarbons on the water surface such as diesel or gasoline.

The Seabin was invented in Australia and is being tested at the marina as part of a Port pilot project, one of the marina’s many commitments to reducing plastics.

“This pilot project is part of our effort to ensure responsible and efficient management of residual materials, one of the main commitments of our 2017–2022 sustainable development plan,” said QPA president and CEO Mario Girard. “It is an innovative solution to preserve the long-term health of the oceans and the St. Lawrence River, and we are proud to be able to conduct this pilot project on Port land at the marina. It is with initiatives like this that we will continue to grow and maintain our ongoing commitment to being a sustainable and innovative port.”

“We thank the Port of Québec for acquiring this Seabin, the first of its kind in the province. It will help us clean up the St. Lawrence and study the river’s health,” added W Products & Services marketing manager Gautier Peers. “Quebec has now joined Ontario, British Columbia, Prince Edward Island, and Nova Scotia as one of the first provinces to use the Seabin. We are very pleased with this collaboration and hope it will serve as an example to other public and private organizations in Quebec.”