SWIMMING IN BASSIN LOUISE THIS SUMMER: THE PORT OF QUÉBEC ANNOUNCES THE OASIS PROJECT AND NORTH AMERICA’S FIRST-EVER HARBOUR BATH!

Québec City, May 31, 2022 – The Port of Québec, in partnership with Société des Gens de Baignade and Village Nordik du Port de Québec, today announced the upcoming opening of the new Port of Québec Oasis and its first item of business—welcoming swimmers to the first-ever harbour bath in North America. This new free public harbour bath will be located at Bassin Louise just outside Espace 400e. The site is slated to open at the end of June, just in time for summer.

“We were looking for a concept that would fit projects like winter ice fishing or summer swimming so that the community could benefit from the full recreational potential of Bassin Louise,” said Mario Girard, President and CEO of the Port of Québec. “So we sat down with the Village Nordik team to work at developing a total concept. This led to the idea of a four-season theme with activities and facilities on offer throughout the year. Meanwhile, we met with representatives of Société des Gens de Baignade in June 2021, and they suggested a harbour bath for Bassin Louise. The idea was very much in line with what we wanted to do and held out real appeal for the summer season. So we decided to make it the first stage of the project.”

A working committee made up of representatives from the Port of Québec, Société des Gens de Baignade, and Village Nordik du Port de Québec was created to bring the Port of Québec Oasis and harbour bath project together.

“Our harbour bath project was well received by the Port of Québec when we presented it to them. In Europe, several cities have been successfully operating such facilities for a number of years, so why not bring the concept here?” explained Michel Beaulieu of Société des Gens de Baignade. “You could say we ‘pooled’ our knowledge and networks to bring Oasis to fruition. Société des Gens de Baignade was involved every step of the way, ensuring ongoing liaison with our contacts in Copenhagen in order to benefit from their expertise in the matter.”

A harbour bath is a swimming area in an urban port environment. It consists mainly of pontoons and a ramp allowing access to water from a wharf. Village Nordik du Port de Québec is heading up the project and will operate the site, with support from the Port of Québec and other partners.

“The Port of Québec Oasis will be more than just a swim area. It will offer a number of services to citizens and families in a summertime atmosphere,” said Marc-Olivier D’Amours, executive director of Village Nordik du Port de Québec. “There will be a rest area as well as outdoor changing rooms, lockers, and showers. The harbour bath will be located between the Renaud 1 and Renaud 2 wharves and provide the equivalent of an Olympic-sized swimming pool with five 50 m swimming lanes and a 625 m² leisure swim area. Lifeguards will be on site at all times to ensure the swimmers’ safety, and flotation vests will also be available.”

In his closing remarks, Girard stressed that the Port of Québec Oasis and its harbour bath were the result of great collaboration between all partners, and he expressed his warmest thanks to all. “Everyone was committed to making this happen. I would like to thank Société des Gens de Baignade, Village Nordik, and the Port of Québec operations team for all their hard work. We’re proud to be able to offer the community this safe and exciting recreational facility,” he concluded.

About the Port of Québec
The Port of Québec is among the five largest ports in Canada in terms of tonnage handled and economic spinoffs and is strategically located to serve the industrial and agricultural heartland of North America. Every year, cargo ships on their way to or from some 50 countries stop there to connect the markets of the Great Lakes and Midwest to the rest of the world. The Port extends from Beauport to the south shore, with 20% port lands serving for recreational uses.

About Société des Gens de Baignade
Société des Gens de Baignade (SGB) is a community group created in 1996 with the aim of opening the waters of Bassin Louise to swimming. Over the years, the organization has worked to raise awareness of the issue among the public and decision makers through various activities and publications and has developed proposals on how to make swimming a reality at the Port. Among other things, SGB studied installations and made contacts in Europe, particularly in Scandinavia, and developed various scenarios for Québec City. 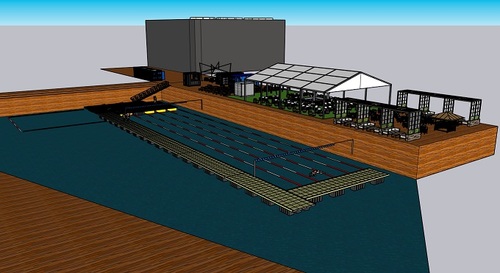 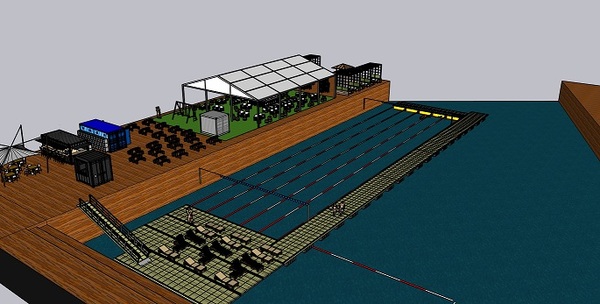