Quebec, March 5, 2021 – The Port of Québec is proud to announce that it will develop a new urban park in the Baie de Beauport sector. This project, which will be made available to the community as early as 2024 to complement the other recreational and tourism developments announced as part of the Laurentia project, is estimated to be worth over $2 million. The Port plans to develop new recreational spaces for families and citizens, in addition to planting several hundred trees and shrubs to green more than 4 hectares of land in the recreational and tourist zone, which will improve air quality in the surrounding neighbourhoods.

The new park will be located at the entrance to the Baie de Beauport sector and will feature considerable improvements to the space offered to citizens on the Port of Québec site. The overall concept proposes a space laid out in several sectors planted with native species representing the boreal forest, flowering meadows and a hardwood wooded area. Citizens will discover a natural and diversified promenade that will enhance their visit to the beach and recreational area. This combination of different natural environments will also enhance ecosystem biodiversity by creating new habitats for Quebec City's wildlife. Moreover, this urban park will create a quality visual link between the community and the Laurentia terminal.

Further to this, the Port of Québec has already been collaborating with a number of local organizations for several years to carry out the greening and landscaping of the riverbanks and enhance the rich biodiversity of the surrounding area. Thus, the Port of Québec will continue to work with organizations such as the Association forestière des deux rives (AF2R), the Groupe d'éducation et d'écosurveillance de l'eau (G3E), the ZIP de Québec and the ZIP de Chaudière-Appalaches in order to once again benefit from their respective knowledge and expertise to create this urban park. Besides, these greening efforts are part of the actions identified by the regional public health department to improve air quality in surrounding neighbourhoods such as Limoilou, as well as the use of more efficient wood stoves.

In total, the vegetated area will represent an area equivalent to more than five soccer fields. This massive greening is part of the commitment to improve the many recreational and tourist areas already present on the Port of Québec territory, and stems from the desire to make the Laurentia project carbon neutral, both in its construction and operation phases. More specifically, this concept corresponds to the Port of Québec's major efforts to implement its 2017-2022 sustainable development action plan.

This announcement is in addition to the Baie de Beauport redevelopment project announced in June 2020. The Port is already planning to invest $7 million to improve and redevelop the recreational area. This modernization will notably allow for the construction of a new look-out post and harbour master's office for maritime activities and the addition of a boat launch, as well as a space dedicated to learning navigation. The project also includes the improvement of recreational and play areas for the benefit of all users of Baie de Beauport and is the result of a co-creation between the Port of Québec and the Forum des utilisateurs de la Baie de Beauport.

Quote
"The urban park project that we are announcing this week is part of the Port’s firm commitment to contribute to the quality of life of citizens and families. What's more, this project responds to the recommendation of the regional public health department, which suggests greening the central neighbourhoods to improve air quality. Our city has the advantage of being strategically located on the St. Lawrence River. The Port's mission is to use this advantage to help the region flourish. The future urban park will be designed for families, for the people of Quebec City, to give them access to spaces that have been underused in the region until now, and this is something we are very proud of.”
—    Mario Girard, President-CEO, Québec Port Authority

About Laurentia
Thanks to a joint investment of $775 million by Hutchison Ports, CN and the Port of Québec, Laurentia will be the deep-water container terminal with the greenest environmental features in North America. It will provide the fastest and most cost-effective access to markets on the North American continent by opening a new maritime highway between Southeast Asia and the Port of Québec starting in 2024.

Creating 7,000 direct, indirect and spinoff jobs (equivalent to 1,750 full-time jobs/year) in Canada during its construction from 2021 to 2024, and more than 1,000 direct (highly paid), indirect and spinoff jobs in Canada once in operation, the Laurentia Container Terminal will increase and secure the export and supply chain for Québec and the country. 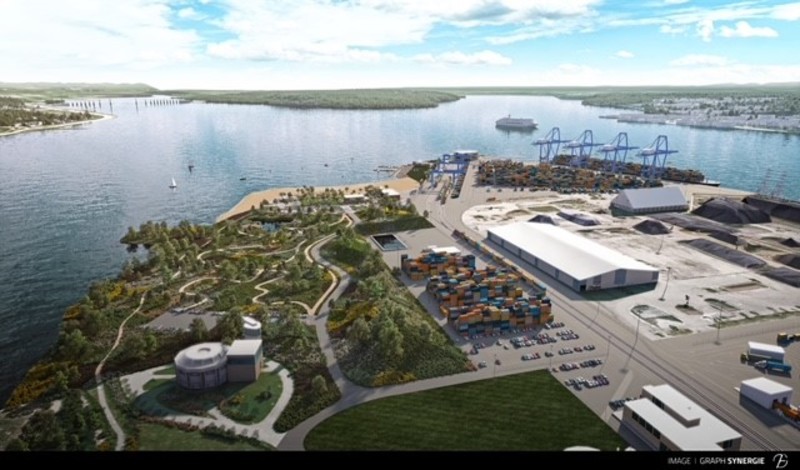