MUCH MORE THAN WHARVES AND SHIPS

Logistics hub to promote trade, handling and warehousing of goods; miscellaneous infrastructures at the heart of companies’ import and export strategies; continuous marine services in supply chains that connect about 50 countries; the Port and the Québec-Lévis marine industry are closely linked to the economic vitality of the greater Québec City area.

In fact, under the Canada Marine Act, the Port of Québec is at the service of Canadian foreign trade and generates significant economic benefits through its undeniable strategic advantages and significant economic spinoffs, particularly because of its role as a transshipment point for many cargo movements between the Great Lakes market and the rest of the world.

As a result, all the trade in goods that goes through Québec and that was produced in major North American industrial centres generates wealth and spinoffs in our region. For example, the agri-food industry in western Canada or the steel industry in the Great Lakes creates quality jobs here, without the Québec City region having the impact associated with the physical presence of these industries.

We must also remember that ports are vital to the economic development of a trading nation like Canada. A very small market requires that certain inputs come from outside and that part of those markets also be served by ships. This is the mode of transportation that remains the most environmentally efficient.

Although the pandemic has severely weakened the cruise ship industry, port activities — although disrupted — have been proved more relevant than ever. Port infrastructure meets a basic need and provides local wealth generation, while making users more competitive. 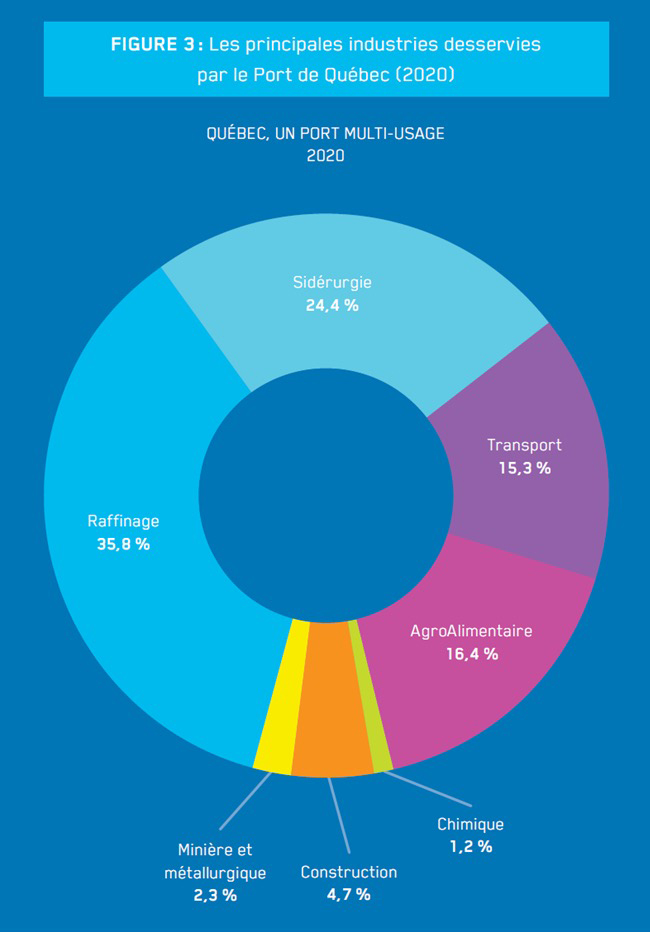 Key industries served by the Port of Québec in 2020

LAURENTIA: A PROJECT WITH A BRIGHT FUTURE

The year 2020 was dedicated to achieving certain milestones, both technically, environmentally and financially.

Here is a list of the most discussed topics:

The current baseline state of air quality in the borough of La Cité-Limoilou was the focus of discussions and it highlighted that exceedances, if Laurentia were to become a reality, would be largely dependent on current conditions. In other words, the contribution of the Laurentia project would be negligible. Nevertheless, the QPA has proposed ambitious mitigation measures for the project and for all other emissions from port activities in its territory. The overall air quality situation must now be managed at the various levels of government, and the QPA is offering its support to participate in this overall effort. A major step was taken by the City of Québec with the recent announcement of a progressive ban on non-compliant wood stoves, which contribute mainly to the release of fine particles in the area in question.

With respect to fish habitat, the Port enhanced its mitigation measures, in consultation with the Department of Fisheries and Oceans (DFO). The QPA will continue to work with DFO on the striped bass and other species offset programs to ensure that the project fully meets the requirements of the Species at Risk Act and the Fisheries Act. In December 2020, the Port of Québec submitted an enhanced offset plan that would create 1.4 hectares of aquatic habitat for each hectare disturbed or destroyed.

The QPA is working with a number of partners to enhance mitigation measures related to ground transportation. Ninety percent of the container volume will be transported by rail, compared to 10% for trucking, making it the second most sustainable container terminal after Prince Rupert. More specifically, the QPA is working to accelerate the use of greener technologies, particularly through more efficient combustion engines (group 4) and the electrification of trains and trucks. 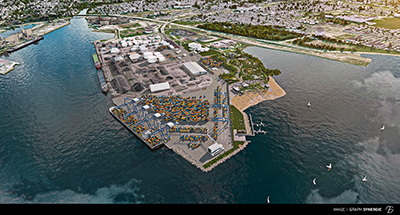 Business for potential future terminal customers has been slowed due to the prevailing context of the global pandemic. Nevertheless, in November 2020, more than 188 cities and municipalities across the province expressed support for Laurentia. The majority of RCMs in the central and eastern regions of Québec would benefit from significant competitive gains as soon as the Laurentia project is operational.

This project will have a major impact for the economy for a number of reasons and on a number of levels.

First, it is primarily private investment that generates significant economic benefits during construction, as do most infrastructure projects. If we exclude the health investments made by the government, the Laurentia project would be the most important non real estate project in the Québec City region in the past 10 years. Although it has important spinoffs for Québec City and Québec as a province, both in terms of employment and increased value added, more than $500 million would come from private investments. Unlike a number of other projects, there is no opportunity cost to balance with this project in the sense that there will not be another project that could replace the Laurentia project.

Once built, this project will continue to generate economic benefits in the operational phase through stable, well-paying jobs. Its real economic contribution lies in its ability to increase user productivity in terms of time and transportation costs. These productivity gains are the source of a country’s economic prosperity and reduce the costs of inputs materials for businesses that need them. They also provide consumers with more reliable and less expensive access to consumer products. Better access to foreign markets is also crucial if Canadian businesses are to continue to be globally competitive.

Second, the project is primarily aimed at a domestic market that cannot be adequately served with existing Canadian infrastructure. These markets are increasingly turning to American ports. The traffic that Laurentia will capture will generate real economic benefits for the country, with no channelling effect. A real net gain.

Moreover, because of its excellent location and the small volume that will be devoted to trucking, the Laurentia container terminal would eliminate seven million kilometres of trucking annually, on Québec roads alone. This would also result in a significant reduction in GHG emissions. Within the complete supply chain, a Deloitte study clearly demonstrates the environmental gains that will result from the project.

In short, the year 2020 reconfirmed the viability and soundness of Laurentia’s business model, which is essential to ensuring the economic recovery of Québec and Canada, while respecting the environment.

The Port of Québec is closely associated with tourism vitality. When the cruise industry can get back on its feet, we will be there to help it recover.

INFRASTRUCTURE: BUILDING THE TOOLS FOR SUCCESS

All this work contributes to the sustainability of existing infrastructure and the development of the Québec Port Authority’s port activities.

In 2020, we reached a record high with more than $45 million invested by the QPA in its territory for the rehabilitation, repair and development of new infrastructure. The latest work includes:

THE TERMINAL HAS A NEW TEMPORARY PURPOSE

Due to the pandemic and the ban on gatherings, activities and events were not able to take place at the Ross Gaudreault Terminal, a space that was generally sought after. Nevertheless, this infrastructure has been put at the service of the community in accordance with current health standards, particularly for community support and food projects detailed in the Community Implications section.

THE MARINA: AN EXCITING YEAR

Despite a delayed start to the season due to the pandemic environment, a lot of excitement will have been recorded at the Marina in 2020. Following all sanitary procedures — and implementing new procedures to make as many services and facilities as possible accessible — the boating season will have been intense and busy. Visiting boats increased by 10% compared to 2019.

The Marina Port de Québec is proud to offer a new service: indoor storage of pleasure craft. The service is highly prized by boaters and it allows the boat to be kept in ideal conditions and to be safe during the winter months.

In addition, a number of actions have been taken to raise awareness among boaters to adopt safe and responsible practices:

On the environmental front, the Marina has been particularly successful, notably with the Seabin waste collector and the Performance Certification of the ICI on recycle + program from Recyc-Québec. These two initiatives will be presented in Section 4.1.

The Marina by the numbers: